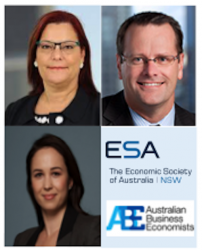 Join us for a new event which brings together the Economics Society of Australia (NSW) and the Australian Business Economists for an evening of forecasts and fun.

On the evening, you’ll hear from some of NSW’s most respected economists, who will be sharing their forecasts – both economic and other – for 2020. Introduction and welcome by Luci Ellis from the Reserve Bank of Australia. You’ll have a chance to connect with other economists, build your network (effects) and indulge in some game (theory).

Introduction and Welcome by:

Luci Ellis is the Assistant Governor (Economic) at the Reserve Bank of Australia, a position she has held since December 2016. She is responsible for the Bank's Economic Analysis and Economic Research departments and is the chief economic advisor to the Governor and the Board. She is also the executive sponsor of the Bank's LGBTI+ allies employee resource group. Luci has been a member of the Australian Statistics Advisory Council since November 2015.
Prior to holding this role, Luci was Head of Financial Stability Department for eight years. She has also served as a Deputy Head of Economic Analysis Department and spent almost two years on secondment at the Bank for International Settlements.

Nicki Hutley is a highly experienced economist with broad-based experience in economic policy, gained over nearly three decades of practice. Nicki spent the first half of her career as a macroeconomist for commercial and investment banks. She is a regular commentator on economic and financial issues in the media and is a sought-after keynote speaker.

Diana Mousina joined AMP Capital in 2016 as a senior economist within the Investment Strategy and Dynamic Markets team. Diana’s responsibilities include providing global economic and macro investment analysis to retail, institutional and internal customers through her regular “Econosights” reports and presentations. Diana regularly presents AMP Capital’s macro views across various media outlets including Bloomberg, CNBC and mainstream Australian television networks and radio stations. Diana also contributes to the dynamic asset allocation decisions and performance of the AMP Capital Dynamic Markets Fund. Previously, Diana worked at the Commonwealth Bank of Australia as an economist in the Institutional Banking & Markets division. Diana holds a Bachelor of Commerce/Economics from the University of New South Wales and has a Masters of Finance at the University of New South Wales.